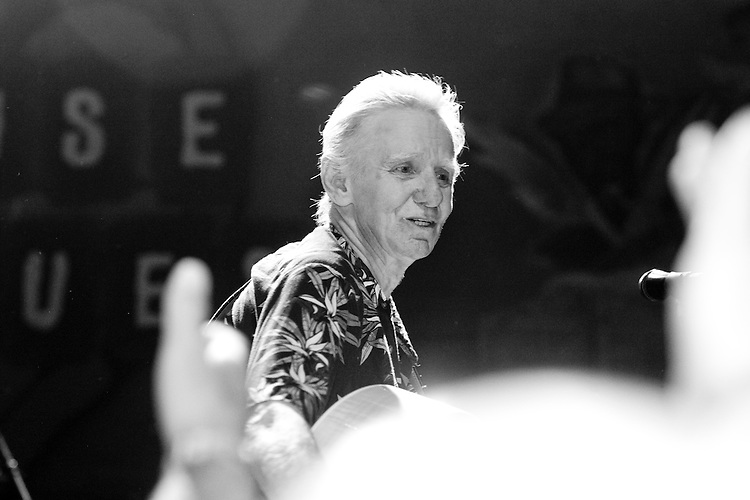 Dale Hawkins performs at the 8th annual Ponderosa Stomp, held at the House of Blues in New Orleans on April 28, 2009.

Dale Hawkins is a noted rockabilly singer and guitar player from Louisiana, most famous for writing the song "Susie Q", later covered to much greater fame by Creedence Clearwater Revival.

Dale Hawkins is a noted rockabilly singer and guitar player from Louisiana, most famous for writing the song "Susie Q", later covered to much greater fame by Creedence Clearwater Revival.

The Ponderosa Stomp is an annual music festival held in New Orleans since 2002 that celebrates the uncelebrated names in American musical history. The festival spotlights musicians who have contributed to the American roots musical canon in various genres, from rockabilly to soul to rock and roll to jazz to experimental. For two nights of the year these mostly forgotten names perform to an audience of aficionados whose memory has not faded and turn back the clock with blistering performances of the hits that did or (in the case of the regional musicians that plugged away unknown to the world at large, as well as those whose songs were recorded to acclaim by other musicians) did not make them famous.

In addition to the two nights of performances the Ponderosa Stomp Foundation (the non-profit founded by the eccentric Dr. Ira Padnos and his coterie of like minded music fanatics the Mystic Knights of the Mau Mau) also produces two days of the Music History Conference, where many of the performers, as well as other music industry names, share stories of their lives in the business. The Conferences take place in the Louisiana State Museum at the Cabildo in Jackson Square.
« less